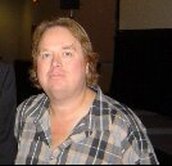 I was born in Bakersfield California in 1957 but grew up in the small farming community of Arvin about 20 miles east of Bakersfield. From an early age I had a voracious appetite for reading often devouring several books a week and reading several daily newspapers before I even started high school. I was involved in Boy Scouts and obtained the highest rank of Eagle Scout in 1974, later I became a scout master and led my own local troop for many years.

During high school I excelled in writing, especially creative writing. I loved playing football and wrestling but I found drama to be my favorite activity during my high school years often dreaming of striking it rich and becoming a famous star. After high school I attended Bakersfield College for two years working towards the goal of becoming wealthy.

In one last final attempt to strike it rich I went on a weekend trip to Las Vegas hoping to gamble my way to a big fortune. It was this weekend in 1982 that changed my life, I gambled all my money away and drank myself into a lonely stupor. On the way home all I could think about was how hopeless my life had become and how I wasn’t getting anywhere in life.  I called my best friend and drinking buddy when I got home to cry on his shoulder but instead my friend said I have something to tell you. He said he had been invited to church and ended up accepting Jesus Christ as his Lord and savior. My friend had been afraid to tell me thinking that it would end our friendship, but instead I thought it was the greatest thing I had ever heard. Astonished, he said would you like to go to church with me tonight and I said yes!

I remembered going to Sunday school when I was a young child and I had been a few times to various churches over the years, but I had never heard any pastor talk about the book of Revelation and the End Times. So that night in 1982 at Calvary Chapel Bakersfield I went forward at the end of the service and gave my life to Jesus Christ and my life has never been the same since then. From the very first day the Lord blessed me with an unquenchable thirst and desire for His Word and especially Bible prophecy. A few weeks after getting saved, the Lord gave me the words for a tract and I called it Good News For You. I printed up thousands of them and gave them away everywhere I went. Shortly thereafter I thought I need to start a monthly newsletter and tell people about the Lord and Bible prophecy. I called it “The End Times” and started writing it monthly and sending it out to friends and family.

I read and studied everything I could get my hands on concerning Bible prophecy. I started ordering cassette tapes from Hal Lindsey and Chuck Smith on prophecy and I would listen to them over and over and then one day a friend handed me a tape by a guy called Chuck Missler. I could not get enough of his teaching, I had soon amassed hundreds of hours of tapes and a whole library of books, most all of them on Bible prophecy. As the years progressed my friends started to call me the prophecy guy and any time there was a question about prophecy people would send them my direction.

When I first started studying Bible prophecy there might be one or two major prophetically related events a year, but towards the latter parts of the 80’s and the early 90’s things began to speed up, suddenly my monthly newsletter was becoming old news before it was even published. So I started an hour long radio program called “Prophecy Watch” and every Saturday right Hal Lindsey we aired the program on a local Bakersfield Christian radio station. My thought and prayer was to syndicate the program nationally, but the cost and the time it took to produce each show soon became more than I could afford or handle and even though we had a good response I just didn’t feel the Lord was blessing it, so after a year we discontinued “Prophecy Watch”.

When computers finally became affordable for the home I immediately fell in love with the technology and became quite the computer enthusiast. My enthusiasm was further enhanced when the internet came along and it helped to fuel my appetite for news and research. The computer and the internet soon became my main tool for writing my newsletter but still I thought there has to be a faster way to get the news out.

In the year 2000 while attending a Bible Prophecy Conference hosted by Hal Lindsey, the last speaker was Chuck Missler. At the end of Chuck’s presentation he asked everyone to stand and bow their heads in prayer. He then instructed everyone to pray and ask the Lord to give each one of us attending a special anointing to put the gifts and talents that we all have for use for the Lord’s work and that we were not sit down until the Lord spoke to us. I prayed and said Lord I love to write and I love computers, how can I put these two things to use for your glory? The Lord instantly showed me in my heart that I was to start a web site ministry devoted to Bible prophecy. I said ok Lord, but I have no idea on how to create a web site.

After getting back home I went and bought some books on creating web sites and purchased web site creation software. Soon what came to be known as Prophecy Update was online and visitors were starting to take notice!

Prophecy Update currently receives about 3,500,000 hits a month with over 180,000 unique visitors. Prophecy Update is viewed in over 120 countries around the world and the daily newsletter reaches hundreds of thousands each month. I have authored several commentaries on various books of the Bible including Revelation, the Gospel of John and the Gospel of Matthew, the Book of Daniel and the Book of Acts and I have also authored the following books, “The End of Times”, “Prophecy Guide”, “Perilous Times” and “Angels, Aliens and Armageddon”.

I am currently single after having been married once in 1992 and then divorced in 1999. I have never had any children of my own but I have had the blessing of raising many children who over the years that the Lord has brought into my life, who still to this day look up to me as their father and their children are now my grandchildren.

In May of 2007 I quit my secular job of 20 years as an Operations Manager for a worldwide delivery company to devote my full time to the ministry of Prophecy Update and promoting the Gospel through Bible prophecy.