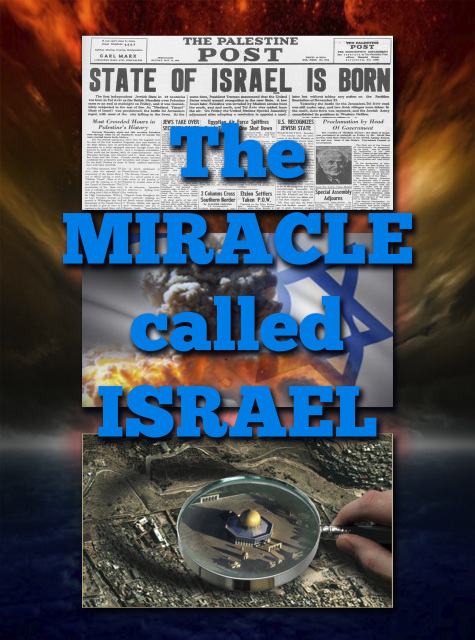 Everyone knows that the tiny nation of Israel, with a population of just over six million people nevertheless receives enormous attention in the world's media, far beyond what its size would warrant.

Have you ever wondered why the tiny nation of Israel is in the news almost every day? Have you ever wondered why when Israel does almost anything it certainly makes headlines? Why the entire focus of peace in the Middle East centers on Israel? Why Israel, what is it that's so significant about this tiny little country about the size of Connecticut?

Some countries are renowned for their strategic location, their great size, their climate and natural resources, or their industrial and manufacturing capability and capacity. Israel is not known for any of these things yet there is no other nation in the world that stirs men's hearts like the mention of the nation of Israel!

People that say there is no such thing as miracles, have never studied the history of Israel. Israel, fits the definition of a modern-day miracle in every sense. God sees the beginning from the end and knows all things, God has a schedule and has appointed times for events to happen. God has lovingly given us a look at His schedule so that we won't be caught off guard when these events take place. He has appointed Israel as His prophetic timepiece, if you want to know what time it is on God's schedule all you have to do is look at what's happening in Israel! Find out how God uses the nation of Israel as sign to the world that His return is near!

As with each DVD in the series, a "Soul Winning" message is also included, our goal is not only to keep people informed, but also to win souls and encourage the believer!
​