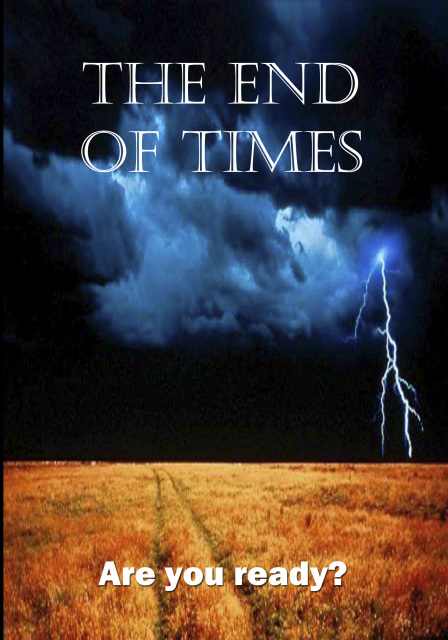 SKU: TEOT-D
$9.95
$9.95
Unavailable
per item
THE END OF TIMES DVD: We worked on this DVD for months and have put hundreds of hours into it's production. You will be amazed by this theatrical cinematic production with amazing footage, cutting edge CGI animations, awesome soundtrack and narration, but most importantly is the message that this DVD delivers. You will want to share it with all your friends and family.

This DVD is a "Soul Winner"

As we were making this DVD we hired a narrator that we thought had the best voice. As he was about half-way through the reading of the script, he just stopped and tears just started flowing down his cheeks, the film editor asked him what was wrong? He said I am not worthy to read this script and the film editor explained to him that none us are and the narrator ended up giving his life to the Lord!

The Message is Timely

We are about to enter a time like no other time, a time that no man has ever seen, a time like no other time in the history of this world, as a matter of fact we are about to enter the end of times. Most movies start at the beginning, this movie starts at the end and ends at the beginning, a new beginning. We are about to enter the End Times and the End Times begins with a mass evacuation. Suddenly, without warning, millions of people will disappear off the face of the earth.  In a moment, in the twinkling of an eye, now you see them, now you don’t. Where did they go and what will happen next?

The world as we know it is coming to an end, the curtains are about to be lifted up and the greatest drama the world has ever known is about to begin. The stage has been set, the characters are in place, and the director is almost ready to shout ACTION!

"The scene inside the church was awesome. I need to go home and lay on my face. Great work man!"- R. Miller

"Awesome video! I watched it last night with my family, and we loved it, and plan to share the word about it" -  C. Young

"My wife and I watched the video and it is outstanding. Biblically solid...... we especially like the clear bible referencing and quoting. The video is a moving tapestry tightly weaved with spectacular photography, bible references, and the signs of the times put together like a jigsaw puzzle. The gospel is presented clearly with tender love. We pray that this DVD gets distributed far and wide. I hope youth ministers have the courage to show this DVD rather than the garbage materials of the emergent church movement." - John Wicklund Board President for Olive Tree Ministries

"I received The End of Times DVD today. It is Superb! For those that don't know much, or anything about Bible Prophecy, this DVD should really open there eyes, a great teaching tool. For those that have grown cold or indifferent in the Lord, this DVD should awaken them.” - T. Nelson
(DIGITAL DOWNLOAD requires high-speed-internet, with either broadband or cable with a minimum download speed of 4 Mbps.)