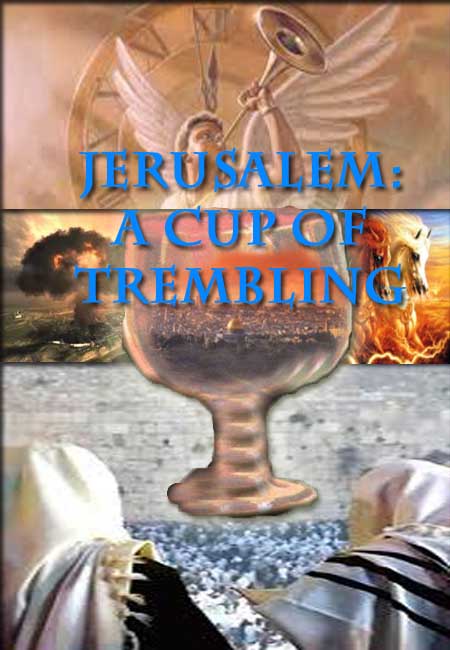 Perhaps you have seen Jerusalem in the news lately. If not, your one of the very few.

In the past few years, attempt after attempt has been made to find a way to bring peace to the Middle East, specifically between Israel and the Palestinians. Each time the peace talks have come to a standstill because of Jerusalem. Exactly as the prophets of God foretold 2,500 years ago, Jerusalem has become a 'cup of trembling' and a 'burdensome stone' just as predicted. Everyone is afraid to mess with Jerusalem, and everyone who has tried has failed.

Jerusalem: A Cup of Trembling will cover and explore the following topics, THE BATTLE FOR JERUSALEM, HISTORY OF JERUSALEM, JERUSALEM THE PRIZE OF WAR, JERUSALEM THE MYTH, WHO OWNS JERUSALEM?, DIVIDING THE INDIVISIBLE, WESTERN INTERFERENCE, THE PEACEMAKER and many more.

You can order this exciting new DVD – “Jerusalem: A Cup of Trembling” that is now shipping!
(DIGITAL DOWNLOAD requires high-speed-internet, with either broadband or cable with a minimum download speed of 4 Mbps.)