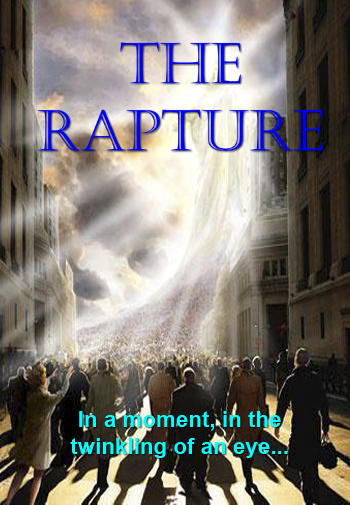 THE RAPTURE: In the twinkling of an eye... - DVD


Imagine waking up, turning on your television or radio and hearing the following:

...this just in, it appears as if millions of people have vanished, just disappeared off the face of the earth. Reports are coming in from all around the world, reports of plane crashes, massive auto and freeway accidents, all too numerous to report. We are waiting for official word from the White House, I believe the President is about to address the nation and the world, yes, hopefully he can shed some light as to what has happened.


Let's tune in and listen to the President live from the oval office...

According to the Lord's own words, we tell you that we who are still alive, who are left till the coming of the Lord, will certainly not precede those who have fallen asleep. For the Lord himself will come down from heaven, with a loud command, with the voice of the archangel and with the trumpet call of God, and the dead in Christ will rise first. After that, we who are still alive and are left will be caught up together with them in the clouds to meet the Lord in the air. And so we will be with the Lord forever. 1 Thessalonians 4:15-17

This new DVD from Prophecy Update Productions that recently brought you the "The End of Times" and "Israel God's Timepiece" DVD's continues this exciting series on Bible prophecy.

As with each DVD in the series a "Soul Winning" message is also included, our goal is not only to keep people informed but also to win souls and encourage the believer!